The French president, Emmanuel Macron, has instructed his prime minister to hold talks with protest groups after anti-government demonstrations led to the worst violence in central Paris in a decade, with more than 100 people injured as cars and buildings were set alight.

Macron is facing his biggest crisis since taking office 18 months ago after the violence erupted on Saturday following weeks of street protests that began against fuel taxes and have turned into an anti-government movement.

The Élysée and key ministers appeared to rule out imposing any kind of state of emergency after thousands of masked protesters from the gilets jaunes – named for their fluorescent yellow jackets – fought running battles with riot police, torched cars, set fire to banks and houses and burned makeshift barricades.

A presidential source told Reuters that the meeting discussed how to adapt security forces and tactics to contain future protests. 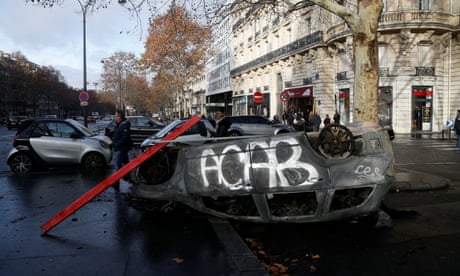 The aftermath of the gilets jaunes riots in Paris – in pictures

Macron, who had said he would “never accept violence”, instructed the prime minister, Édouard Philippe, to meet what he has called legitimate protest groups and opposition politicians this week in an effort to calm tensions and stop “professional” rioters from infiltrating street demonstrations.

The Paris prosecutor Remy Heitz said 378 people were in custody, including 33 under the age of 18. He said many of those arrested in battles with police were men aged between 30 and 40, often from regions far from Paris, who had “come to fight police while claiming to be part of the gilets jaunes movement”.

The interior minister, Christophe Castaner, and his head of staff will be questioned by a senate committee on Tuesday over how thousands of protesters were able to play cat and mouse with police through central Paris for hours.

Macron flew back from the G20 summit in Argentina on Sunday and went straight to inspect damage at the Arc de Triomphe. Graffiti all over the base of the 19-century monument read: “We’ve chopped off heads for less than this” and “Topple the Bourgeoisie.” Scores of used teargas canisters filled the gutters.